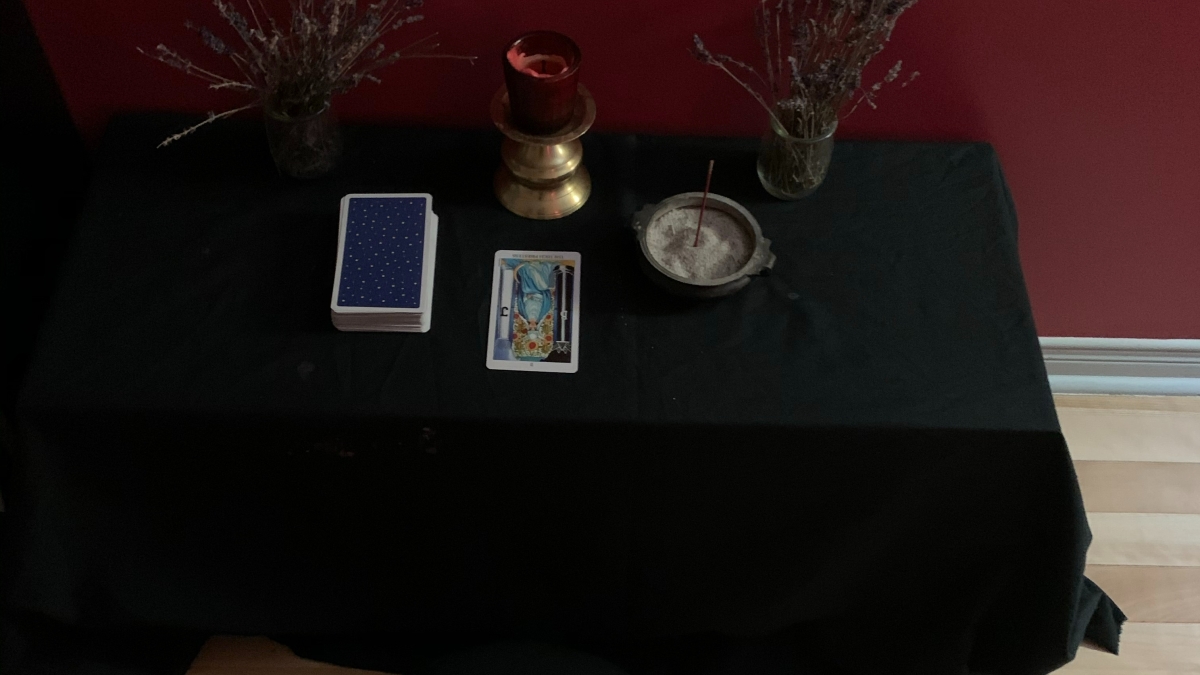 My altar is so simple that when I see people’s altars online, I’m struck by how bare bones it really is. What you see below is a daily type of variant that you’d see most often at my altar. My meditation cushion, tarot, my candle and incense. The flowers are dried lavender from my garden and are there just to make it prettier. Ultimately the only required items on my altar are the candle and the incense.

I generally use frankincense incense and a handmade candle in a red votive. Usually I use a white candle but it doesn’t really matter. What you’ll see in the photos is an odd pink beeswax votive that was a failed attempt at making a red votive candle for my old coven (so I’m working my way through them during my daily devotion/practice).

Some days I’ll shuffle things on my altar depending on my focus and mood but you’ll see that it’s always very simple. Some days I pull out my athame but most days I don’t as I have a young child at home and I don’t want him to walk in and see it or for me to forget to put it away after my practice.

On the top left is what you’ll find most often at my altar. In fact, the card on the altar is my daily card of the day using the Ryder Waite tarot deck (which I’ve only started using after years of using other decks and I’m finding a deep appreciation for that I didn’t have in earlier years of tarot practice). It’s a simple, functional altar.

On the top right, when I’m specifically working with my lineage, I tend to pull out a statue of Isis and my athame as they are things I associate with my lineage, my teachers, and the practice I was trained in. The statue isn’t necessary. It’s an added touch that helps remind my of my aspirations and my teachings.

On the bottom left are the tools that were on my altar for years. In fact, they are the tools I’ve tended to leave out when I have company over as they are the easiest visible reminders for me that don’t spark questions or comments. I’m not Buddhist, but I have visited Sarnath, where he gave his first sermon and had a profoundly spiritual experience while wandering the lotus gardens there. Also, my lineage is heavily infused with eastern teachings so from time to time I do perform pujas using those beads. Again, everything is functional and simple. The statue unnecessary but a simple reminder of said experience at Sarnath and some of the deeper aspirational teachings of my lineage.

On the bottom right are the tools I carry with my into my new practice, which is a very new, French gyno-centric pagan practice in Quebec. On the right is palo santo, which I’m using to smudge (and yes, I know it’s a problematic tool for multiple reasons: appropriation and environmentally but I have it in stock and am using it up). The stone on the left is the link to that tradition and my coven mate in said new tradition and ultimately functions as a pentagram type of symbol.

I don’t have 20 crystals or statues and I’m often admittedly perplexed by the elaborate nature of altars that do. I understand that some altars will have offerings (and I have dabbled with these from time to time) and that for some the elaborate nature of their altars helps create that witchy feel, which brings about connection, but I don’t think it’s necessary. That said, when I do full circles within either lineage that I’m working with, my altars are more elaborate and in keeping with the tools needed for said rituals.

But aside from the rise of the instaWitch and aesthetics of witchdom, I think that I can safely say after 25 years of practice that most of the things found on social media altars aren’t necessary and don’t actually make for better witchery. In fact, the heavy reliance on all the trappings is actually a crutch that, dare I say it, reveals an undeveloped discipline of mind in practice or a fascination with aesthetics over practice. Yes I realize I might get some backlash over this and will say that despite what I wrote, it’s fine if you want to nourish your witchy vibe this way – to each their own – I’m just saying that it’s not necessary to practice.

So someone else’s altar might look fancier or prettier than mine, or yours, but I think it’s important that we ask ourselves: what is the purpose of an altar?