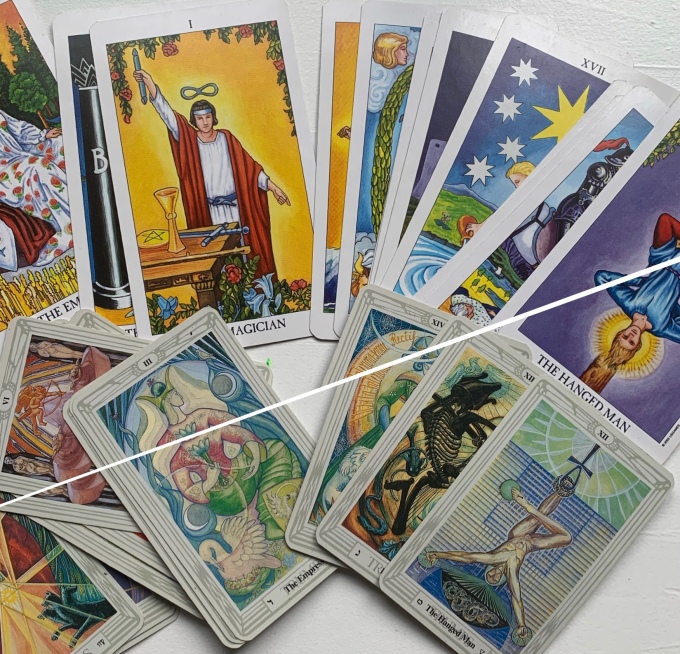 I have loved tarot for many years. From my first deck, which was the Haindl tarot, to my latest deck, This Might Hurt, I have been reading cards (for myself and the rare friend) for over 20 years.

But I’ve recently I’ve learned that despite potentially being invented as an Italian card game, the Arcana system and formula for reading a traditional deck is considered to be a closed Romani practice developed by them and one in which the Romani people have faced a lot of prejudice around. Google searches and books may tend to tell us otherwise if we only scratch the surface, but that doesn’t make that information accurate. Romani culture has long been diasporic because of persecution, thus their history tends to be oral. And while the western European narrative prioritizes the written word as fact; we must remember that the written narrative is always written by those in power. There is a need to go beyond the first few hits or the white centric books published on the issue to get to the heart of the discussion.

What is a closed practice you ask? Good question. Loosely put, as a white settler, my understanding is this: essentially closed systems mean that the tradition is considered closed to outsiders, or those not initiated into it from someone within the tradition. Note that an outsider to the cultural tradition initiating other outsiders is also incredibly problematic. Working with the Orishas and Hoodoo; the Kabbalah; Yoga; Santa Muerte, Catrina Sugar Skulls (La Calavera Catrina); and smudging, animal totems and so many other Indigenous practices are just a few examples of closed and/or appropriated practices that are all too often adopted by new age and pagan practitioners without realizing the harm adopting them does to the cultures they came from. In fact, the very practices we tend to adopt are often ones that the very same culture has experienced oppression and persecution over, making it incredibly triggering to see it being appropriated and celebrated out of context.

I am learning that my beloved Tarot also falls under this category. There is mixed information on the webs about tarot and even within the Romani community from what I understand. Essentially, what I’ve learned is that some Romani feel that as long as we aren’t selling readings, it’s ok to use the Tarot; but others feel that it is closed and should be stopped completely.

And I won’t lie, it’s not an easy idea to give up a practice I love so much. However, as someone who really believes in dismantling colonialism and oppression, I’m determined NOT to be that person. If the Romani tell me that this is a closed practice and that seeing white women practice it without societal backlash is hugely triggering, then I will respect that and listen. I will give up my Tarot cards and the work I do with them (from Pathworking to “Qabala”) in order to decolonize my practice. This will involve a HUGE shift in my practice and undermine the backbone of most of my traditional teachings. But I promised myself that would walk the talk. I would learn to be a trustworthy white settler. I don’t ascribe to motto “Harm None” but if I did, this dismantling work would integral to the realization of said motto!

Don’t worry though, I don’t have to give up all my practices. Phew, good news! Not all forms of cartomancy divination are closed, it’s just decks based on the standard 78 card tarot with a major and minor arcana, roughly based on the playing card system. If cartomancy still appeals, Oracle decks are an open tradition that can be chosen, with the caveat of course to select oracle decks free of cultural appropriation or problematic associations. Because, let’s be honest, choosing an oracle deck that is problematic isn’t going to be any better than sticking with the tarot. So those shamanistic, animal spirit oracle decks also won’t be part of my practice.

These are the 2 oracle decks that I currently have that I’ll be switching over to:

I appreciate that the Moon Oracle deck is made of high quality cards and allows me to develop more knowledge of lunar cycles and associations. Astrology is something I’m already somewhat familiar with and this deck allows me to hone this skill. The language of it makes sense to me so even though I don’t find the images super evocative (they’re beautiful but they don’t trigger an intuitive reading based on the imagery). I do think that they will end up being my main deck going forward, which I think is great because astrology and lunar cycles are something I’m actively working with these days.

The past year I’ve really been working with plants and the Illustrated Herbiary appeals to me because it feels based on the lessons that plants offer us. For example the idea of perseverance being associated with Dandelion. The oracle draws on White Sage and Tulsi though, so there may be some issues with it that I have to examine. Also, the quality of the deck isn’t great. It’s ok, but the cards are thin and the edges are sharp (this will fade with use of course). Otherwise I think it’s a lovely deck that I’m looking forward to getting to know.

I’ve also ordered another Oracle deck that I’m looking forward to getting to know. I found the imagery to be super evocative to me personally, so I’ll update more when I get the cards.